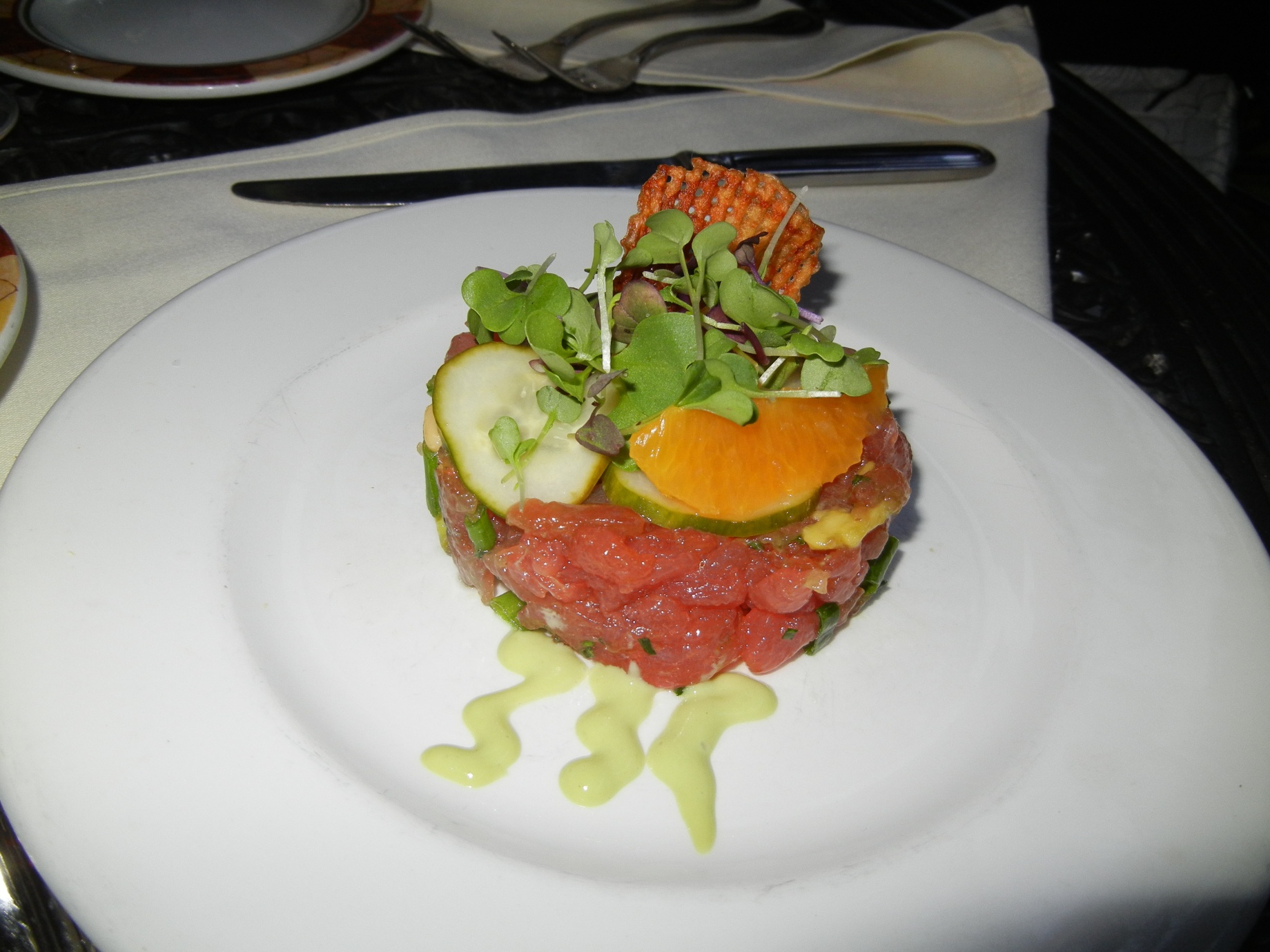 As I have said in the past, restaurant week is the best and worst thing to happen to the Baltimore dining scene. While most restaurants limit their restaurant week offerings in order to still maximize profit, Kali’s Court defies this mold and still offers great food.

The restaurant itself is tucked behind a patio garden, right off of the cobblestones on Thames Street in Fells Point. Chances are there will be a Bentley or an AMG Benz out front, but don’t let that turn you away. The interior is two levels, in which thick wooden beams and dark brick provide the infrastructure and main accent of the restaurant. Fresh whole fish and shellfish on ice are on display off to the side of the restaurant, and chances are one of them will become your dinner. The main dining room is a bit dark, but very elegant. I would strongly encourage you to try to reserve a table in Kali’s garden patio. The greenery and various aquatic decorations make for a peaceful deviation from the busy street. If your table isn’t available immediately, make sure you try one of the signature cocktails at the bar – the sage Collins was especially delicious.

I have never dined there on an ordinary evening, but the restaurant week menu still offered many selections of fresh seafood – at a very reasonable price too. Selections for appetizers included tuna tartar, crab artichoke crisps, PEI mussels, grilled calamari and several small salads. A few people in my party ordered the mussels and tuna tartar. The tuna was a ruby red color with a wonderfully fresh flavor.  It was minimally seasoned with olive oil and salt and then garnished with pickle chips and mandarin oranges. Tuna tartar can be a bit mundane; but Kali’s court rendition was a nice start to our meal and embraced the high quality fresh tuna meat. The PEI mussels were also very delicious. The large mussels were served in a Thai style coconut milk broth, which was infused with subtle aromatics to enhance the shellfish. The star of the appetizer offerings was the grilled calamari. Perfectly charred pieces of squid were topped with a fennel and shaved apple salad with a drizzle of olive oil and balsamic. The smokiness of the squid worked so nicely with the fresh crunchy fennel and apple on top. My only complaint was that the calamari was a little overcooked, but still delicious nonetheless.

All the options for entrees were also very tempting, ranging from swordfish,  whole bronzini, seafood pasta, and lamb shank. The star of the group was the whole roasted bronzini. The mild flaky fish was butterflied for presentation with a drizzle of olive oil, lemon and fresh parsley on top.  As expected, the fish was very fresh and very delicious. The rather simple preparation highlighted the beauty of the fish . It was truly the perfect summer meal. The fish was  accompanied with haricot vert and roasted potatoes, but unfortunately both were an after thought and had little flavor. Several people in my party settled on the swordfish, which I had a chance to sample. The swordfish steak was grilled and then served over lime accented rice and a corn salsa. The dish wasn’t the most creative, but was still very good. Swordfish can sometimes be a bit rubbery, but Kali’s preparation was perfectly cooked through with delicate seasoning. The lamb shank was a gargantuan hunk of meat, which was braised and then served with mash potatoes and sautéed spinach. Served in some of it’s reduced braising liquid, the lamb was ‘fall apart” tender and very tasty. The shank still had some of the marrow in tact, which was also a nice treat with the mash potatoes. Lastly, was the capellini pasta with fresh scallops, shrimp and mussels. The pasta was cooked al dente and then lightly tossed with butter and lemon juice. On top sat shrimp, mussels, and colossal sized grilled scallops. The scallops had a natural sweetness and tasted of the ocean, while being cooked just barely all the way through. I would have ordered the dish alone just for the scallops. The shrimp and mussels were both cooked well but didn’t have the most flavor.  A bolder sauce for the pasta could have made the dish a bit more special, but it was still delicious.

Finally was dessert, which was a chef’s sampler of Mediterranean treats. Most of which were variations of baklava, with various preparations of filo dough with traditional custards. There was also a rich multilayered piece of chocolate cake served, which was a table favorite. All in all the meal was delicious and has been my best restaurant week meal to date.  The $30 price tag for this restaurant week meal was truly a bargain relatively speaking. Considering the whole roasted bronzini alone is usually $36, I was able to enjoy that plus the grilled calamari and dessert for only $30. Unfortunately, the service was a bit lackluster at times, but in fairness our waiter did have more table than he could manage on that night. We didn’t mind waiting though because of the beautiful garden setting and perfectly cool summer night. Kali’s Court definitely impressed, and I look forward to eat there again to sample their non-restaurant-week offerings.