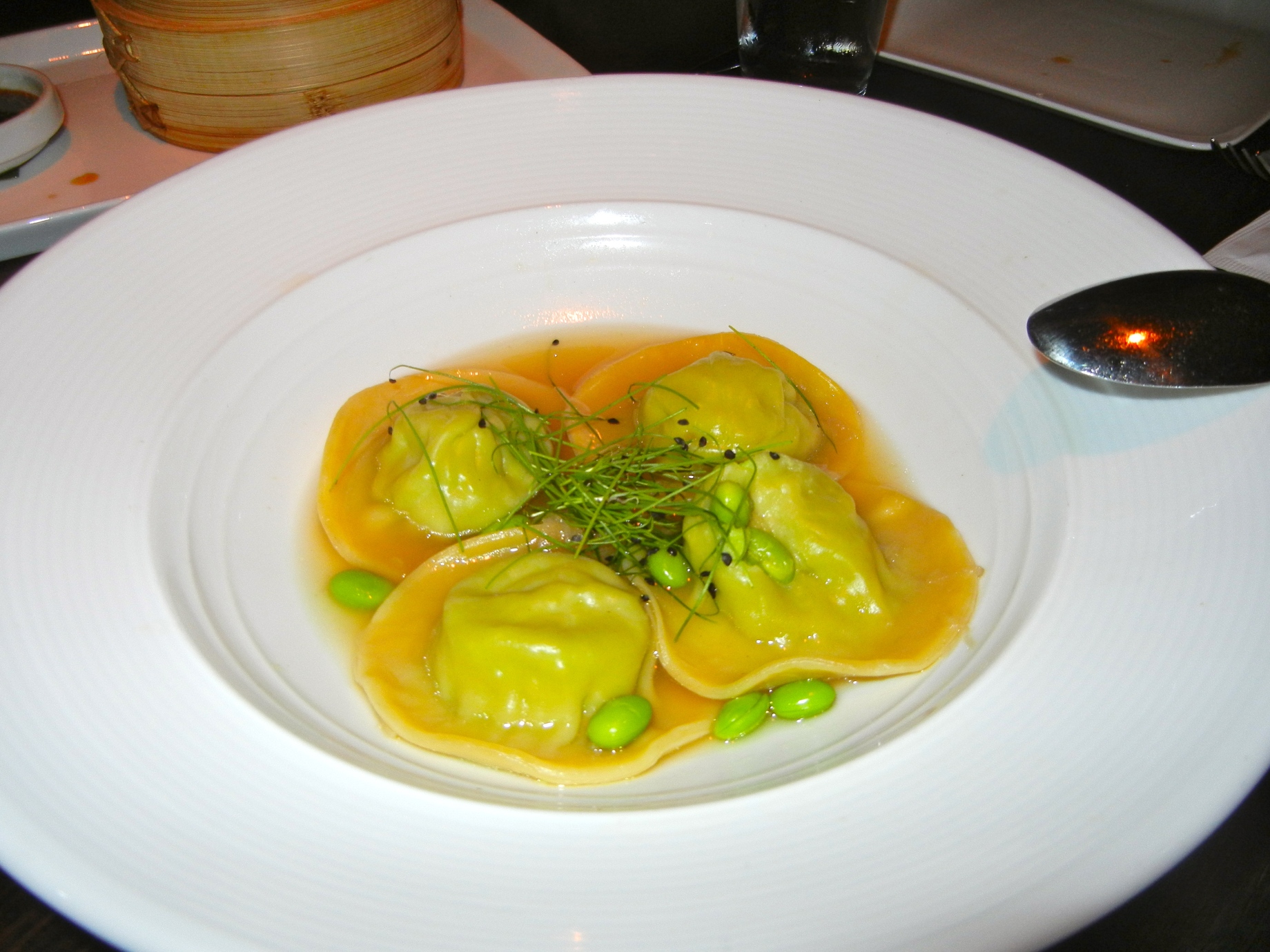 Buddakan is an Asian-Fusion restaurant, with its original location in NYC, and a welcome second location in Caesars Palace (Atlantic City, NJ). The restaurant itself is located in what seems like a recently added upscale extension to Caesar palace. The dimly lit interior is a modern mix of Asian influence with a trendy NYC vibe. As you walk in you immediately notice the enormous long table in the center of the dining room, with a giant gold Buddha statue over top the end of the table. There are several private dining areas located around the main dining area as well as an upstairs.

We started off with a couple of the restaurants specialty cocktails ($11.5 each). The Fortune, featured Stoli orange vodka mixed with house-prepared passion fruit and pomegranate juices – a bit “girly” but still good none the less. I ordered the Bonsai, which is Buddakan’s rendition of a mojito. In place of mint, the cocktail was muddled with cilantro, which was surprisingly tasty and refreshing.

By the time our cocktails were ready, so was our table. Our server, who was very knowledgeable of the entire menu, advised us to order the infamous edamame ravioli. The stuffing was comprised of a velvety mixture of edamame and what I thought was mascarpone cheese, with handmade pasta dough. The plump ravioli  was served in a delicate broth with steamed edamame and micro chives. The starter was truly something special; I haven’t seen edamame used in such a creative and appetizing way before. Our waiter advised us that Buddakan’s restaurant concept encourages sharing the dishes “family style”, yet she mentioned that the portions were not family style – a bit of a gimmick. As a table we ordered the cashew chicken, kung pao monkfish, char-grilled aged beef, San Bei basil chicken hotpot, and an order of crab fried rice. The entrees came out in a staggered fashion, with the beef being the first to arrive. The beef was aged NY strip and was already pre-sliced (not ideal), but still nicely prepared and very delicious. The dish came with a mountain high serving of fried potato sticks, which we definitely could have done without. The Kung Pao monkfish was also one of the more memorable items of the night. The dish came with three nicely fried pieces of monkfish, which was then lightly dressed with bean sprouts, celery leaves, scallions, peanuts and a sweet/spicy glaze. The monkfish had a texture similar to lobster and was nicely accentuated by the other aromatics on the plate.

Both of the other chicken dishes were very tasty; however, they were a bit more run of the mill in terms of creativity.  As a table we decided to order crab fried rice, which was a perfect accompaniment with everyone’s meal. The rice was seasoned primarily with herbs and spices, as opposed to sauces, leaving the fried rice with a more natural color. The star of the rice was the colossal pieces of jumbo lump crab. We were each pleasantly surprised to see how much and the size of the crab that was in the rice. We finished our meal with zen-ful donuts and the Vietnamese chocolate cake. The zen-ful donuts were lightly fried pillows of dough with banana cream inside, not one of my favorites. The Vietnamese chocolate cake was absolutely delicious though and definitely compensated for the lacking donuts. I’m not exactly sure why the cake was considered Vietnamese; nonetheless it featured several layers and textures of chocolates with an iced coffee ice cream. Both the cake and ice cream were to-die-for.

Our meal at Buddakan was very memorable, both for the food and the good company. From start to finish, the food and service was very impressive. As I write this review I am still thinking about some the dishes consumed that night. One thing is for sure, I look forward to eating at Buddakan again soon.