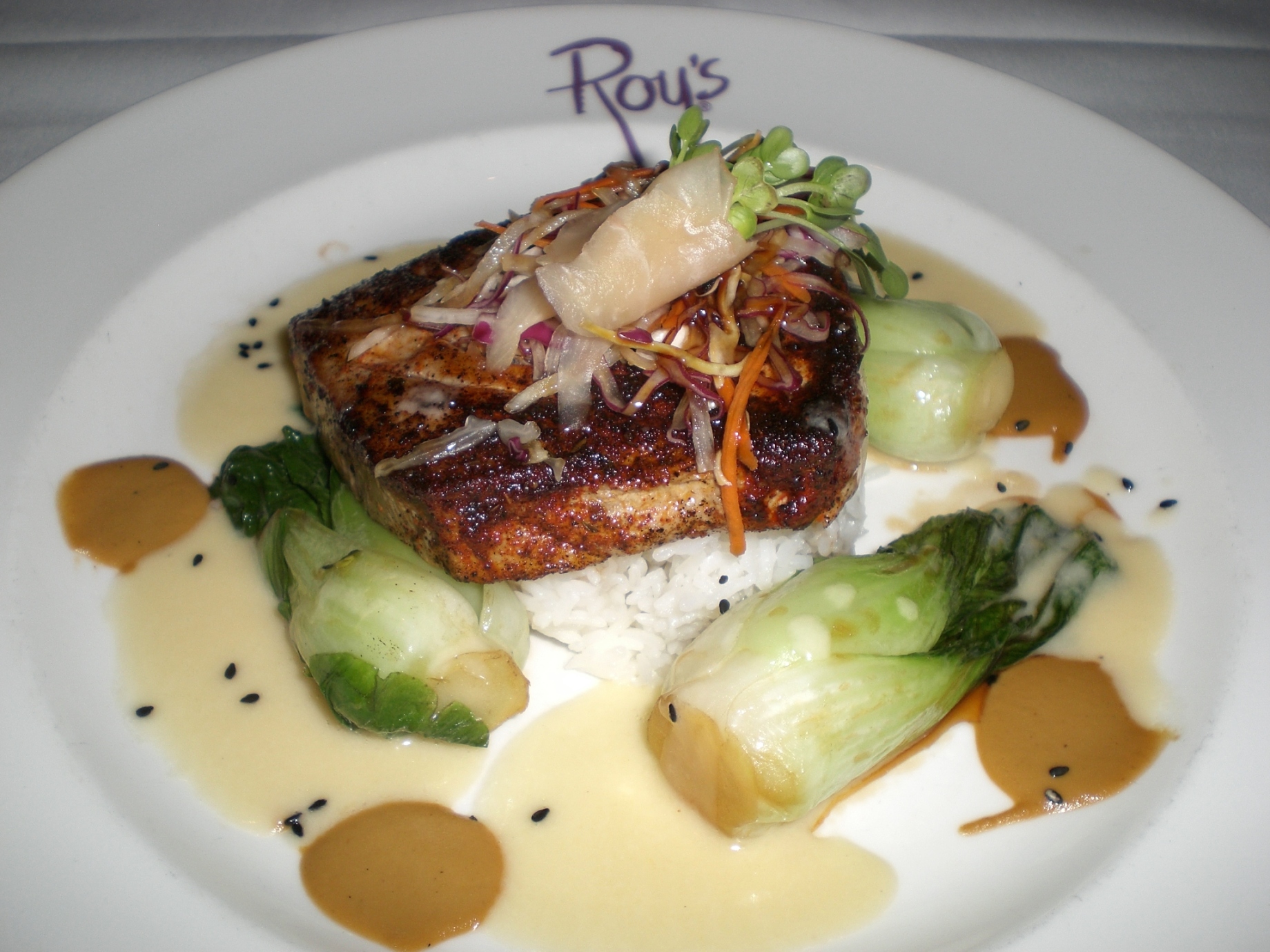 I was excited to eat at Roy’s for years. I had always been interested in Hawaiian Asian Fusion food but Roy’s was somewhat disappointing. The interior was very nice, accentuated by yellow and purple colors with nice lighting.

As soon as one sits down, the staff brings you fresh edamame seasoned with shiso leaf and course sea salt. My party and I started off by ordering two types of sushi for appetizers. One of the rolls was a spicy tuna roll with avocado, raw salmon, kampachi, and tuna on top. The other roll was a california roll with avocado as well as asparagus topped with real authentic seared kobe beef on top. The sushi was absolutely excellent, definitely the highlight of an otherwise mediocre meal.  The spicy tuna roll was $12 while the kobe beef roll was $18.

The menu is designed to have as many fish dishes as possible based on the seasonal availability and regional specialty. I ordered Roy’s signature entre, which was a 10-12oz portion of Ahi Tuna, seared until medium rare and then paired with jasmine rice, baby bok choy, with two different sauces along the side of the plate. The first sauce was a mustard type of sauce, the other being a light cream sauce with citrus. Neither sauce complimented the overly seasoned piece of tuna. The best part of the dish was probably the rice and baby bok choy, sadly enough. My guest ordered a seasonal specialty, kampachi with jumbo lump crab on top. This dish was served with a similar cream sauce that the tuna had, as well as “dirty” spicy rice with small-diced vegetables in it. The kampachi was seasoned and cooked better than the tuna; however, the “jumbo-lump crab” seemed canned or maybe not of the highest quality because it tasted watered down. While I wasn’t satisfied with either entree, I must add that the wait staff was top notch. Our waiter was very friendly and attentive. Additionally, the kitchen and restaurant in general was properly staffed, having plenty of chefs and runners, which expedited food service.

All in all, my experience at Roy’s was less than spectacular. For a restaurant that specializes in fish, I couldn’t believe how inept the dishes were. On a final note though, I would return to Roy’s, but only for sushi and drinks, hold the entrees.