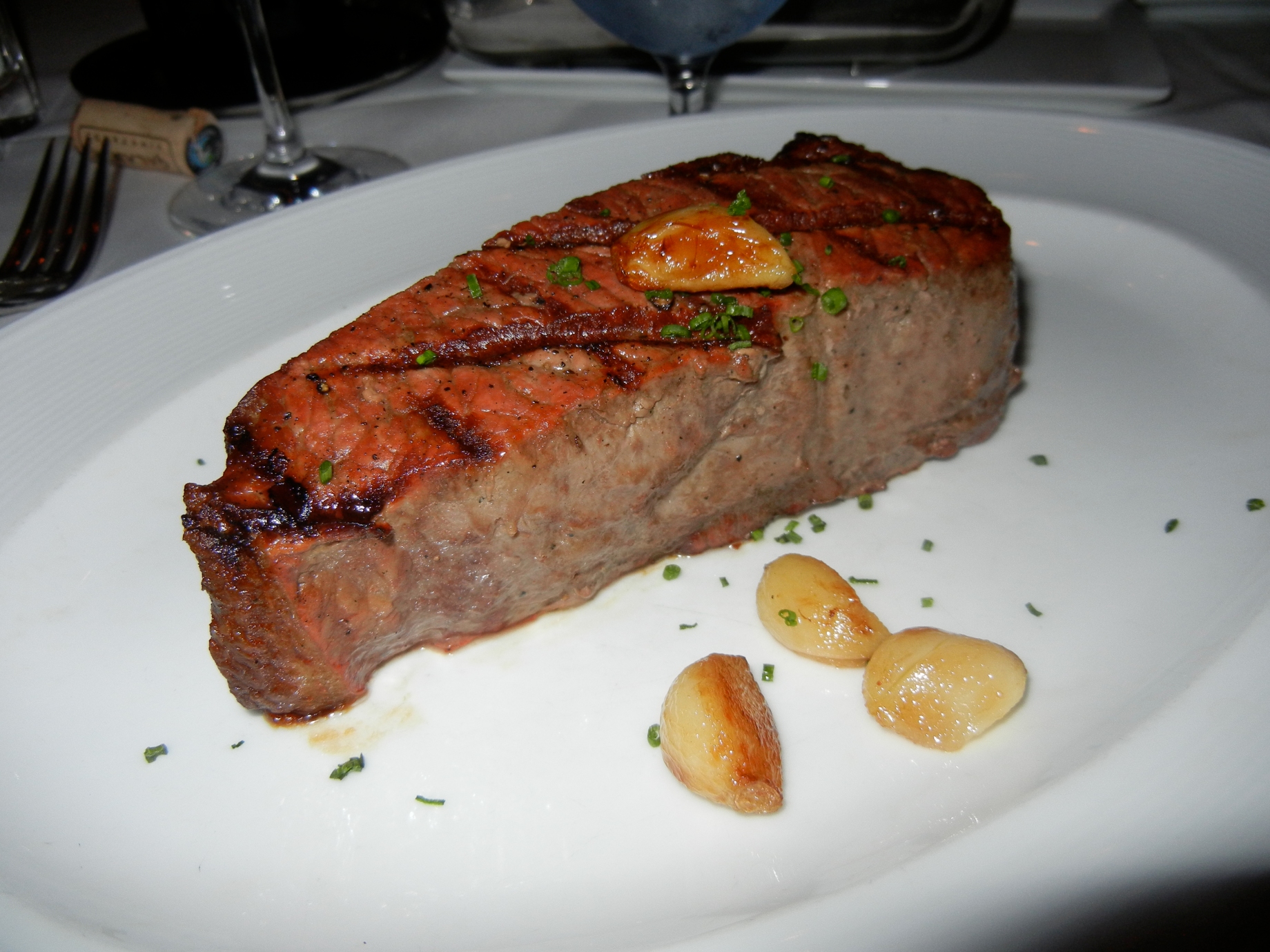 There is not a shortage of high profile steak houses in Las Vegas. Almost every hotel on the strip has a steak house boasting a celebrity chef’s name. From Wolfgang Puck’s “Cut” to Tom Collichio’s “Craft Steak”, it is nearly impossible to choose. Luckily, I found out that Charlie Palmer has a steak house in Las Vegas as well. I was supposed to eat at his D.C. location a year ago but never got the privilege – so this was the perfect time to try it.

Charlie Palmer Steak is located at the Four Seasons Hotel. Similar to the hotel itself, Charlie Palmer steak is oozing with elegance and luxury. The intimate lighting with woods and dark colors was a nice combination with the over-sized and comfortable booths.  The menu is your usual steakhouse fare, with many shellfish appetizers, classic salads, your usual cuts of meat, and some alternative entree items. Prices are reasonable, relatively speaking. Steaks range from $28 to $60, much less expensive than Wolfgang’s “Cut” restaurant. This is Vegas after all.

Upon a recommendation we started our meal with Charlie’s unique Caesar salad. Three hearts of romaine were rapped with Serrano ham, the tastiest white anchovies I have ever had, and then dressed with a homemade Caesar dressing and croutons. This was hands-down the best Caesar I have had. While we were eating out salad, the drunk guy at the table next to us advised us to order these “hatch chili peppers”, which are apparently a rare pepper only found in New Mexico and have the tendency to only be good two months out of the year. I am glad we listened to him because these grilled hatch peppers were amazing. They had a delicate flavor with a thin crisp skin. Some of the bites were spicier than others but the taste was similar to an Anaheim pepper mixed with a Serrano – fantastic. I ordered the 20 oz. New York strip steak and my friends ordered the Porterhouse and Hanger steak. All the steaks were prime cuts of Omaha beef, perfectly seasoned with coarse salt and pepper and then scorched under the broiler. Each steak had a nice crust and some grill marks, but wasn’t over powered with char or that grilled taste. My NY strip was sheer perfection. The two-inch thick hunk of meat was melt-in-your-mouth tender, and just had the most amazing after taste.

We also ordered the sautéed spinach and Yukon gold puree for sides. The mash potatoes were very good but lacked a bit of salt. The spinach was perfectly executed. It was cooked beautifully, having seasonings that nicely accompanied the leafy taste, while not having any bitterness what so ever. The spinach was definitely the best rendering of the boring vegetable I have ever had.

All in all, we could not have been more impressed by Charlie Palmer Steak. The steak was probably the best I have tasted while the appetizers and sides made the meal even more memorable. Possibly the most memorable part though was how some friends of ours back home surprised us by ordering an excellent Gallante Cabernet Sauvignon and having it delivered to our table upon arrival. The fantastic wine, food and company made this the best birthday dinner to date.