Washington D.C. has always been a good food town. As a Baltimore native, I constantly hear about intriguing restaurants that would never work or exist in my hometown. As with all big cities, the residents are constantly on the prowl for something interesting, something beyond a touristy steakhouse or “fusion spot”, despite what NY Magazine writer Richard Morgan believes.

In the fall of 2016, D.C.’s culinary accolades became immortalized as the Michelin Guide released its inaugural publication for the nation’s capital – ultimately awarding the coveted Michelin stars to 12 total restaurants (ten restaurants with 1 star, and two restaurants with 2 stars). On the shortlist for two Michelin stars were Jose Andres’ minibar – a longtime but ever evolving DC favorite doing justice to avant-garde cuisine; Inn at Little Washington; and the new kid on the block, Aaron Silverman’s posh Pineapple & Pearls (P&P).

After reading up about Aaron Silverman and his very successful, no reservations restaurant Rose’s Luxury, I closely followed news about P&P as it neared opening exactly 12 months ago (April 2016). It wasn’t long before the restaurant was appearing in Food & Wine Magazine and even got honorable mentions in non-food publications such as GQ.

The name Pineapple & Pearls is supposed to represent hospitality and elegance – “the alliteration offers a sense of playfulness and fun.” P&P isn’t your typical fine-dining establishment – its single tasting menu format isn’t for everyone. Neither is the price at $150 per person inclusive of tax and gratuity or $250 inclusive of beverage pairing (either alcoholic or non), tax and gratuity. The menu changes often and reservations are very hard to secure. The restaurant has created its own reservation system, which allows booking for five weeks out each Monday at 10am. The restaurant is also closed Saturday and Sunday, although its coffee shop is open daily including weekends.

On a chilly April evening I finally dined at Pineapple and Pearls and, as I write this blog post, I am still mesmerized by my experience. I had arrived very early for my reservation, but the staff kindly and graciously accommodated me forty minutes before my original reservation time. The evening started with a choosing between two welcome cocktails – one of the only choices you will make during your dining experience. I opted for the gin cocktail with chartreuse and some cucumber.

Once I got seated the team explained the concept and asked if I wanted to opt for any cocktails or their beverage pairing. Knowing I still had an hour drive home later I didn’t want to get completely boozed up, so I settled for the “pineapple” cocktail. Shortly thereafter I was told I will be receiving three snacks, which come out rapid fire to stimulate the palette.

The first course (or snack) was their signature absinthe bonbon suspended above a juice of apple, melon and absinthe. The bonbon melts in your mouth but I didn’t receive a ton of absinthe notes in it, nor from the juice at the bottom of the glass, although the juice was very refreshing and tasty. The next course was a bite of raw beef tartar topped with paddlefish caviar and served on a beautiful crosshatched crystal plate. The luxurious combination of beef and caviar was nice, but the mixture rolled in the middle was a bit odd and the flavors weren’t distinguishable.

I’ll admit, after my first two bites, as much I tried to avoid it, I started to think maybe I’d completely overhyped this in my own head and set myself up for an expensive disappointment.

The third and final snack was a hoecake topped with shaved perigord black truffle and chive. Traditionally hoecakes are somewhat similar to a pancake made with cornmeal, but this interpretation was more reminiscent of a crispy hushpuppy, perfectly fried and elevated by the earthy truffle.

To prepare you for the more substantial courses to come, the staff bring you a washcloth that is perfumed with keffir lime leaves and gets rehydrated table-side by hot jasmine scented water.

steeping herbs in the consomme

The next course, split pea consommé, was easily one of my favorites of the night and encapsulated “spring” very well. The course begins with the staff bringing over a copper pot of pea consommé, and then setting down a bowl of tazo ham, pea, spring vegetables and aromatics of greens and foam in front of you. The staff then takes the centerpiece of fresh herbs from your table and steeps them in the consommé for about a minute as they continue to explain the dish. Finally a ladle of the delicate consommé is poured over the bowl. The dish was incredibly fresh and resilient, having a depth of earthly/grassy notes from all the herbs contrasting perfectly with the smoked/dried ham.

One of the first reviews I read of P&P was by Tom Sietsema in which he highlighted the bread course that evening of a pain au lait with foie gras mousse and hazelnuts. So naturally when I received the white Oaxacan mole with tortillas as my bread course I was mildly disappointed. However, this bread rendition was still very tasty – the piping hot tortillas were used to scoop up the savory mole made of cashews, almonds and white chocolate. While each component on its own was tasty, the dish was particularly hard to eat, so I finally just starting drinking the mole like soup.

The first of three main courses arrived not too long after – a stunning presentation of smoked sturgeon with alliums and beets. Precisely cut cubes of beets and sturgeon rested on top of an onion custard and sturgeon jus gelée. A dish as delicious as it was beautiful.

Following the sturgeon was another fish course of black sea bass, in a somewhat “traditional” take, as the staff member admitted when he dropped off and explained the dish. Traditional or not, the fish was perfect. It had that crispy edible skin and the beurre rouge sauce traditionally made with ‘blanc’ (white wine), but was here made with red instead. I nearly worked up the courage to ask for another serving of this delectable dish, but thankfully didn’t as there were still more courses to come.

The conclusion of the main courses was an absolute showstopper of lamb baked in a mock sousvide style for 12 hours inside potter’s clay. The course was first introduced by a member of the staff bringing out the lamb in potters clay that will be used for the next evening’s dinner. They explain the cooking method and what was to come, and before long the “Dabba” arrives.

A Dabba is the traditional South-Asian stackable, compartmentalized container used for lunch. At P&P, the Dabba consists of three stacked bowls, capped off with a lid holding lamb kibbe and a stuffed grape leaf. The bowls are then unstacked side by side and you see the dishes you will soon enjoy – the sousvide lamb with mint and its jus, crispy Arabic basmati rice with goji berries and nuts, and a clear stew of white beans cooked and flavored in a Native American style. It will be a sad day when this dish inevitably gets replaced on the P&P menu.

A traditional French tasting menu usually has a cheese coarse to let the diner know the savory courses have elapsed and the sweet will soon follow. While P&P certainly isn’t a traditional-style tasting menu, they do still have a cheese course which they personalize by adding some pyrotechnic theatrics. A platter of warmed Virginia Grayson cheese is scooped up and then placed on a sweet potato brioche. The cheese gently slides off the spoons since they have been heated by flaming rocks on the cheese platter. The gooey cheese went very nicely with the house-made apple butter.

As the savory courses came to an end, the first of three dessert courses arrived. Intended to be a palette cleanser, the tangerine sorbet, served in its own shell with a pour of hibiscus soda, was perfect. The crisp delicate flavors were a nice transition after the heavier lamb and cheese courses that preceded it.

At this point the meal had probably surpassed the two-hour mark, an opportune time for a caffeine boost before the final courses arrive. Diners are offered tea and/or coffee of their choice. I would highly recommend any of their coffee drinks. P&P operates as a coffee shop with pastries and quick bites during the day and on weekends. The coffee here is no joke, as evidenced by the gorgeous handmade Slayer espresso machine from Seattle and the use of premium Lofted Coffee from Brooklyn. The result can be summarized as some of the best coffee I’ve tasted to date. And believe me, I’ve tasted a lot of coffee. 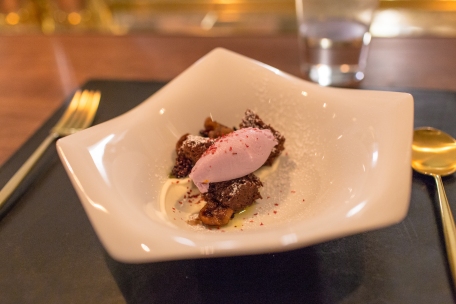 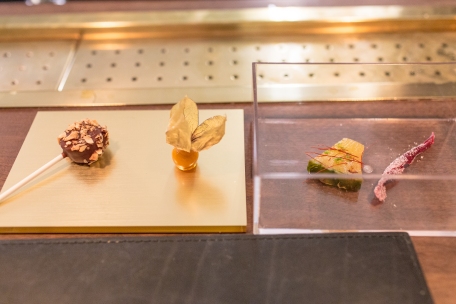 The meal came to a conclusion with the main dessert and a few whimsical final sweet bites. The dessert that evening was a flourless chocolate cake with Okinawan potato ice cream, fried chestnuts and balsamic older than me at 30 years, to be exact. The potato ice cream and fried chestnuts were my favorite part of this dessert. I was a little surprised by the choice of a flourless cake if the diner didn’t have a specific allergy but it was still quite tasty. If anything, perhaps it was intended to make the dessert a slightly lighter direction, given all the food that had preceded it. The final bites included a lollipop of frozen banana covered in chocolate and nuts, a candied gooseberry, some pineapple pressed with honey, chilies and lime, and a dehydrated piece of rhubarb. Each bite had a different texture than the others, with my favorite being the pineapple, how fitting.

As I write this review I can still remember my experience at P&P as if it were yesterday. I think that, in and of itself, speaks volumes to the restaurant. The meal wasn’t perfect, but the highs were exceptional while the lows were scarce. Granted, this was my first time dining at a two Michelin star restaurant, but I have never been so awed and impressed by a dining experience. From the moment I walked in and the staff didn’t need my name because they already knew who I was, to the point where I left with a parting gift of cold brew coffee, shortbread and a copy of the menu with a note on P&P stationary – you are treated like family. The sophistication yet playfulness of the food, with creative and sometimes theatrical presentations in an immaculately elegant setting, make P&P second to none in D.C., or the mid-Atlantic as a whole as far as I’m concerned. This restaurant is a must for any self-proclaimed foodie or just anyone with an open culinary mind looking to have it blown.

Click here for the full gallery of images from that evening.