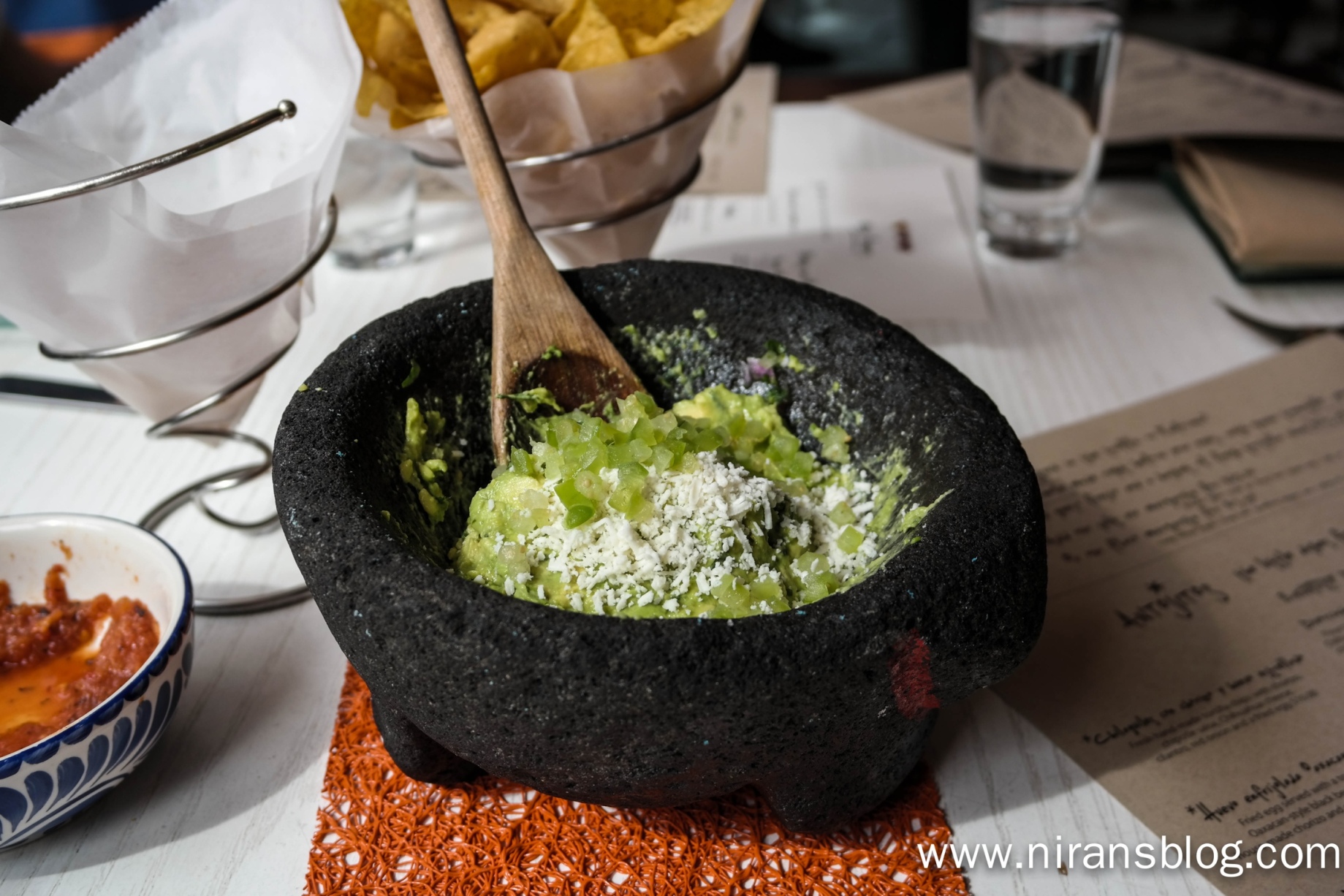 Jose Andres has been a DC restaurateur icon for over a decade now. With established restaurants such as Zaytinya and the flagship MiniBar, Oyamel is the newest addition to the Andres restaurant group. Oyamel is a Mexican tapas restaurant, known for fresh vibrant flavors in both it’s cuisine and elaborate drink menu.

The restaurant itself is very playful, using bright oranges and yellow tones throughout the restaurant with cartoon-like butterfly images on the windows. An upscale, yet comfortable feel resonates in the restaurant, in which the wait staff also does an excellent job to make you feel at home.

The cocktail list features many premium margaritas and cocktails using only natural juices and ingredients. Notable offerings include the Al Gusto, a cucumber infused tequila cocktail with St. Germaine and lime; and the Oyamel, dubbed Jose Andres’ favorite cocktail which is essentially a premium iced margarita garnished with salt foam. For purists there is also a large variety of tequilas to sample.

As with most tapas restaurants, there are many dining options, almost all of which are in the $6-14 price range. Regardless of what you are in the mood for, I highly recommend the guacamole to share for the table to start. The guac is prepared tableside with the usual accompaniments of cilantro, salt, serrano, lime, but then garnished with fresh tomatillo and queso fresco (a soft Mexican cheese similar to feta). The result is a stunning guacamole, which can’t be consumed fast enough with Oyamel’s house made tortilla chips. Ordering another round of guacamole is perfectly acceptable – we did.

It was hard to believe that the rest of the menu would live up to the guacamole, but it does. Menu offerings range from ceviche’s, to salad, to tacos, to various meat and seafood dishes. It’s a lot to take in, but certain ingredients will strike the diners fancy and dictate your selection for you. I settled on the ceviche de atun de pacifico, a tuna based ceviche with scallion, avocado, pecans, jalapeno and crispy amaranth. The soft tuna is seasoned nicely with lime and has a great contrasting crunchy texture from the crispy amaranth (a fried fine grain). The scallion and jalapeno liven up the dish and detract from the acidic nature of the ceviche. The pecans were unnecessary in my opinion, and the dish probably would have been better suited with cashews.

The next wave of dishes to arrive were hotter plates, including lbóndigas enchipotladas con queso doble crema. For us gringos, the dish featured soft beef meatball minimally seasoned and served in a chipotle tomato sauce with a touch of double cream. The dish is somewhat rich, but its small portion will be perfect for most diners. The meatballs were very tasty and we couldn’t help use the tortilla chips still on our table to mop up the remaining sauce.

The meatballs were quickly overshadowed, however, by the crispy brussels sprout dish which followed. While brussels sprouts have become a trite staple on most restaurant menus, Oyamel revolutionizes the preparation with flare. The brussels sprouts are fried and then served with a chile de arbol sauce, pumpkin seeds, peanuts and lime juice. Frying the sprouts takes out a lot of the bitterness and naturally adds a great texture. The sauce is somewhat peppery, but still light and well suited with the spritz of lime. The peanuts are a welcome addition to the party, adding both texture and saltiness to dish. Each bite was absolutely amazing, and so tasty you quickly forgot it’s a vegetarian dish.

At this point it was very difficult to still think about food; however we couldn’t pass up the great selection of tacos made with house made tortillas. Our server informed us they were out of the cricket tacos, which we didn’t mind, but apparently are a crowd favorite for Oyamel patrons. We didn’t think twice though, with such excellent options such as mahi-mahi, and various preparations of beef and pork. I sampled the mahi-mahi taco, which are seared and then topped with a ancho chili paste, onions and fresh cabbage. The fresh tortillas setup the entire dish, while the fish had a perfect texture and wasn’t overpowered by the robust ancho chili. I also sampled the Cochinita pibíl con cebolla en escabeche taco, which is Yucatan-style pit pork taco served with sour blood orange and pickled onions. Although I didn’t really taste a ton of the blood orange, the pork was very delectable and could have been eaten with only a tortilla.

A guest in our party tried the vegetarian taco offering of sautéed mushrooms in cream with shallots. He was blown away by the flavor and use of ingredients, which forced him to order a second for dessert.

Just as we were about to fall out of our seats from culinary bliss, our server informed us that the kitchen was running low on churros, for which he advised us to place an order soon. Although probably a marketing ploy, we didn’t mind as the crispy treats tossed in sugar and cinnamon were delectable. Not that the churros needed an accompaniment, but they were served with a warm mildly spicy Mexican chocolate sauce.

All in all, Oyamel is impressive. Its concept is somewhat refreshing and a nice deviation away from Spanish style tapas. The ingredients are top notch, and most dishes are aimed to still be somewhat light on the palette. Our server was extremely knowledgeable about the food and drink menu and didn’t steer us wrong with his recommendations. He also didn’t laugh at us when we order a second round of guacamole, which we appreciated. Not shockingly, Jose Andres hits another home run for DMV diners to enjoy.